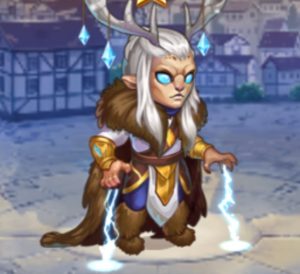 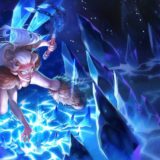 Krista His sister Krista is useless without Lars, but this guy can be useful without Sister. But remember, they are “Twins” by game settings…it means his best partner is his sister after all. So if you want the best performances of Lars, just use him with his sister. 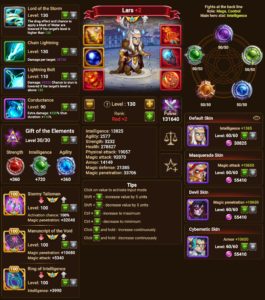 As with other rear magic DPS( like Orion, Kai, Mojo, Peppy, etc ), Lars’s Armor can hardly be enhanced. (Krista(Glyph) and Satori(Skin) can enhance armor because they are heroes in front)
So he is vulnerable to physical attacks. Lars is normally placed in the fourth or fifth position so normally he is safe from physical attack. But Lars often dies in a case like this. 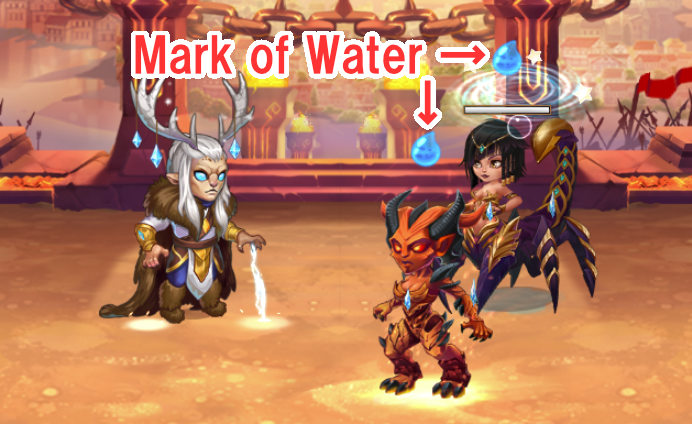 If you want to use Lars and Krista, You must understand how “Mark of Water” works. It is pretty important to increase Lars’s magic damage by his 2nd and 3rd skill.
For further information about “Mark of Water”, please check the article below. 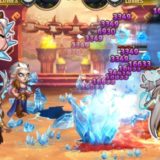 Lord of the Storm Lars summons a storm at the enemy’s backline, dragging heroes to its eye and applying a Mark of Water to each of them.

Important: This skill itself does not deal damage to enemies. This skill just drags the enemy into the storm and attach “Mark of Water” to them. (also it boost Magic Penetration Buff by 1st Artifact)
So… what is this skill for? This skill is to combine with Krista’s 3rd skill. Krista’s 3rd skill “Frozen Needles” freezes the ground with thorns under the enemy and if enemies move in this area they will be damaged. And these skills are the reason we call them “Twins Combo”.  Use Lars’s 1st skill just after Krista used 3rd skill… and they will be dragged to the storm and ground by ice thorns.
The timing of activation of Lar’s 1st skill is the most important factor to maximize damages. Ice thorns disappear in about 8 seconds. Just make sure that Ice thorns are there throughout Lars’s 1st skill are dragging enemies. If ice thorns are already melting when you want to use Lar’s 1st, just wait for another ice thorns.

In Guild War or Campaign mode etc, attacking command is manual and manual mode is the best mode for Twins combo. You should practice in Guild Battle(FB) or Training(Mobile) to use that synergy in the best timing.

AoE damages by strong lightning. Opponent’s middle to rear heroes are normally not tough so if Lars uses this skill just after previous combo (Krista 3rd + Lars 1st), they can’t hold in many cases. 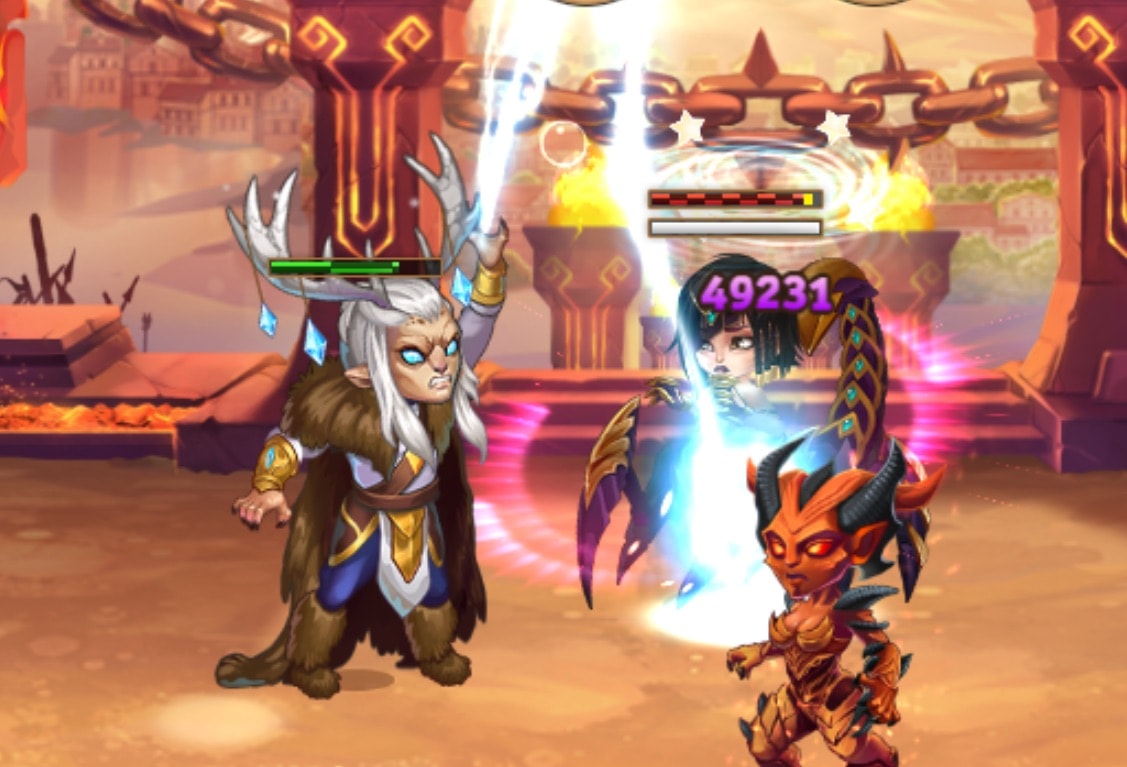 This strong single hit Lightning Bolt does not deal much damage because this Lightning Bolt strikes basically “the nearest enemy”… in many cases, it’s Tanks that have decent Magic Defense. But if Lars or Krista already cast “Mark of Water” to some of the enemies, Mark of Water become like a lightning rod and they are prioritized.
In that case, Mark of Water increases the damage by 4th skill so low maximum Health heroes like Celeste sometimes die in one shot.

This is a kind of passive skill and pretty useful. This skill makes 2nd and 3rd lightning skills stronger.
But keep in your mind, damages by Twins’ main combo (Krista 3rd + Lars 1st ) do not get benefit from this skill. Because of the calculating formula of damages of that combo based on Krista’s Magic Attack. (3rd skill of Krista) So no bonus by this skill to the main combo.

All of the skills are very important but1st skill lv is the best value. Because if Lars can’t drag the enemies into the storm by 1st skill, Twin combo become much weaker. If your 1st skill lv is lower than the enemy’s hero lv, then do not hit them. Just avoid them.

2-4 skills are also important so just max it out. Prioritize skill lv of Lars than other team members. If DPSs(Lars and Krista) are weak, you can’t win.

Default > Cybernetic >= Devil > Masquerade
If you’re going to try to make your first paid skin a Masquerade, You don’t need to buy it until the Default skin is maxed out. The investment efficiency is almost the same, so there’s no reason to buy Masquerade skin when the default skin isn’t maxed out.

When you spend almost the same amount with Maxed default skin(30,870 stones) to Masquerade(lv43) , Magic attack will be + 5960. Masquerade has a slightly higher increase in Magic Attack, but with the Default Skin you will also receive an increase in Magic Defense and Physical Attack.

Magic Penetration is a very important skill in this game, but you can’t make enemies Magic Defense under 0 with Magic Penetration.
Fortunately, Lars’ Magic PEN can also be raised by Artifacts and Glyphs. So, if these and colors raise your Magic PEN sufficiently, Cybernetic Skin may be your priority. But this doesn’t mean that you don’t need to grow Devil Skin. Later in the game, more and more players will be using Heroes like Maya, Cornelius, and others whose first Artifact is Magic Defense. Devil Skin is a must to beat those powerful Magic Defense teams.

All of Lar’s Glyphs are important. Max out Magic Penetration first, then Int and Magic Attack.
Spend 30% of Glyphs to Lars, another 30% to Tank, rest to Krista and other support or healer heroes.

2nd is the most important artifact for Lars.
How about 1st? Yes, Magic Pen is very important for the magic team. But you should keep in mind that Magic Pen can’t make opponent’s Magic Defense under 0. Many heroes Magic Defense cap is around 20k. So if your Lars already has over 15-20k+ Magic Pen by normal stats (by Equipments, Glyphs, Artifact 2nd, etc), 1st Artifact activation buff is not too important for Lars’s damage dealing. But 1st Artifact also affects to combo with Krista’s 3rd skill( Frozen Needles ) . So I recommend to just level up to max and make it 5 stars. It buffs 21,360 Magic Pen and I think it’s enough. Of course, making 1st Artifact 6 stars is best but I’m talking about Priority. If you have artifact coins to make Lars’s 1st 6 stars, spend it to Tank’s 2nd or other heroes. (like Jorgen’s 1st… it buffs Magic attack)

Don’t use Lars without Krista. Without Krista, Lars’s 1st skill becomes just breeze.
Classic Twins magic team is Astaroth for Tank, Jorgen for support, Martha for the healer. Celeste is not bad choice because she has Magic Attack Buff by Artifact 1st.
If you want to be more aggressive, use Orion with twins.

No shops sell soul stones of Lars. You can get it by Heroic Chest (spending gems). Also, Chapter 11-13 of Champaign mode but it’s a bit far away for beginners.