As the sixth member to be used in battle, Axel is the most versatile and can be useful against any opponent, so I highly recommend him as your first pet. If you have just started the game and are not sure which pet is best for you, Axel is the safest choice.
Looking at the skills, you may think, “Isn’t he a pet only for defense?” but he is also very useful for attacking.

Axel’s most significant advantage is his #1 skill in battle, “Bubbles of Justice!”. The details of this skill will be explained later, but simply put, this skill dramatically improves the survival probability of fragile heroes like DPS, support, and healer. In this game, the more allies who survive, the more advantageous the game is, so increasing the survival chances of fragile heroes becomes a very potent advantage.

In the early to mid-game, the power between players is often quite large, so you may not realize the benefit of Axel as much as you would expect. If the damage from the opponent’s DPS exceeds the damage that can be dispersed by the “Bubbles of justice!” skill at once, there is no way to get rid of it.

The pet you will most benefit from in the early game is probably Oliver, but in the later game, you will begin to appreciate the benefits of Axel, so take your time to bring him up. (Of course, it is a great idea to develop them at the same time as Oliver if possible.)

These skills are used when Axel is used as the sixth member in the battle. 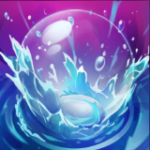 Axel applies a shield that distributes physical and magic damage taken by allies between all heroes, proportional to their remaining health.
The shield can distribute 685,800 (5,500% Skill Power + 6,000) damage
Cooldown: 15 seconds

*K’arkh (the blue squid-like hero on the defensive side) has a skill that deals massive damage to three heroes who are lifted up.

This skill is the most important one in his skills.
With this skill, damage up to a certain amount can be distributed to all allies. Basically, think of it as a skill to increase the chances of survival of not-tough heroes with lower Health, Amor, or Magic Defense like DPS, Healer or Support heroes.

The total amount of damage the entire team takes will not change. But, for example, when a Support hero with low Health takes critical damage, if this skill is activated, the hero with high Health, like a Tank hero, will take more damage and avoid instant death of Support hero.

Even if a hero has only 10 health remains, as long as the damage does not exceed the shield’s capacity, no matter how much damage is taken, it will be distributed to the entire team, and the hero will not go down.

Keep in mind that this skill does not distribute Pure damage. 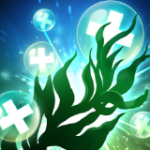 Axel grows a magical seaweed under the ally with the lowest health. That seaweed increases all healing received for 10 seconds. The seaweed activates when healing is first received.
Increases healing received by 50 (0.325% Skill Power + 9.8)%
Cooldown: 5.85 seconds

The skill is triggered when Axel turns blue, and a small patch of seaweed grows under the target hero. The activation trigger, which affects the actual amount of heals by this skill, is when an ally gets healed and is easily discernible as the seaweed grows.
The seaweed remains as long as it is not activated (i.e., the hero is not healed).
The seaweed can be present at the feet of several heroes at the same time. If there is a seaweed that has not yet been activated, a second seaweed will grow under the next lowest health hero.

In the video, the seaweed is attached and activated as follows.

STEP.1
Axel uses this skill（3rd one / to Sebastian, Blue Bard）
STEP.2
Celeste heals herself and activates seaweed for herself
STEP.3
Celeste heals Sebastian and seaweed under Sebastians is activated 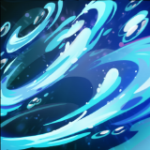 This passive skill reduces the maximum damage in a single hit to a hero whom Axel is patronizing. That will prevent fatal damage from enemies like K’arkh and Cornelius, who damage heavily in a single hit.

The displayed number of damage reduced by this skill will be shaded in red.

In the video above, Axel is patronizing Heidi (the monkey hero), and when Heidi is about to take a critical 214,494 damage, this skill reduces the 120,795 damage, and only 93,699 damage was taken.
Conversely, this skill is almost useless against a hero like Yasmin, who deals many small damages.

It depends on whether or not you want Axel to be your pet in battle, but if you want to have him as your 6th member in a battle, you should prioritize the stone on the left side (Dawnstone) over the stone on the right side (Sunstone).
In that case, as for the color level, it is better to raise it up to violet if possible since the capacity of the first skill, “Bubbles of Justice!” is important.
If you make it V +1, or if possible, V+2 and maximum on the left side stones, he will do a pretty good job even in a battle with over 800,000 power opponents.

If you don’t want him to be the 6th member in the battle, just focus on growing the right stone (Sunstone).

Benefits by VIP and the level y…