Have you already got Cleaver?
In this article, we’ll explain about Cleaver, the only Heroic Chest’s Grand Prize in the game. 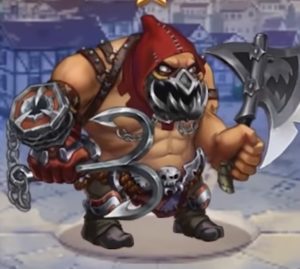 In this game, this tank hero is basically only available through Heroic Chest.
As a matter of fact, Cleaver’s odds of getting him are not so low so even an unpaid player can get him. You have only a 0.01% chance of getting Cleaver, but the more Heroic Chests you open, the odds of getting him will increase (Official said it). I’ve played this game for about a year and I’ve already pulled the cleaver twice on the free Heroic Chest.
Please check the “How to Get Cleaver” section for more information.

Cleavers is an Absolute star hero from the moment you draw them, which is a huge advantage if you get them early in the game. But I, personally, think getting Cleaver is not necessary because many people don’t use him for the main team even if they have it. If you already have a useful tank, e.g. Astaroth, Aurora(on FB and web version she is so strong) and you’ve grown it quite well, there’s no need to switch over. 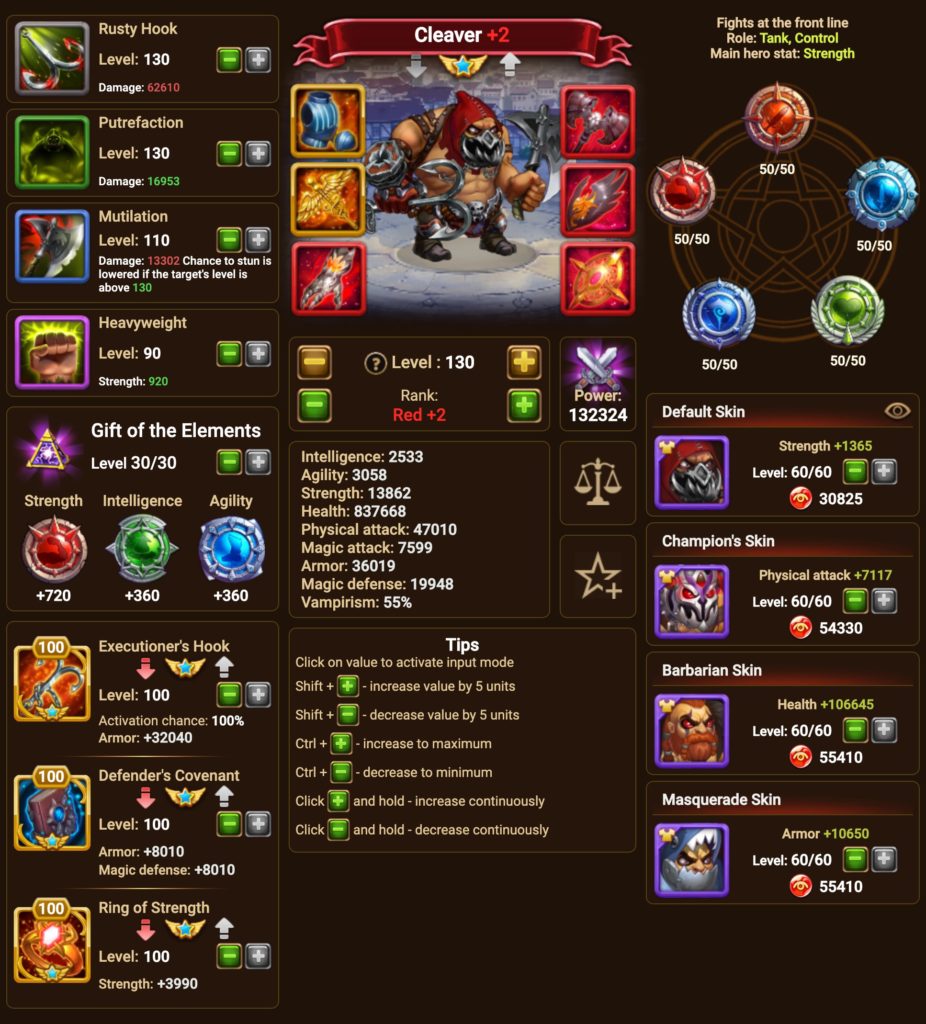 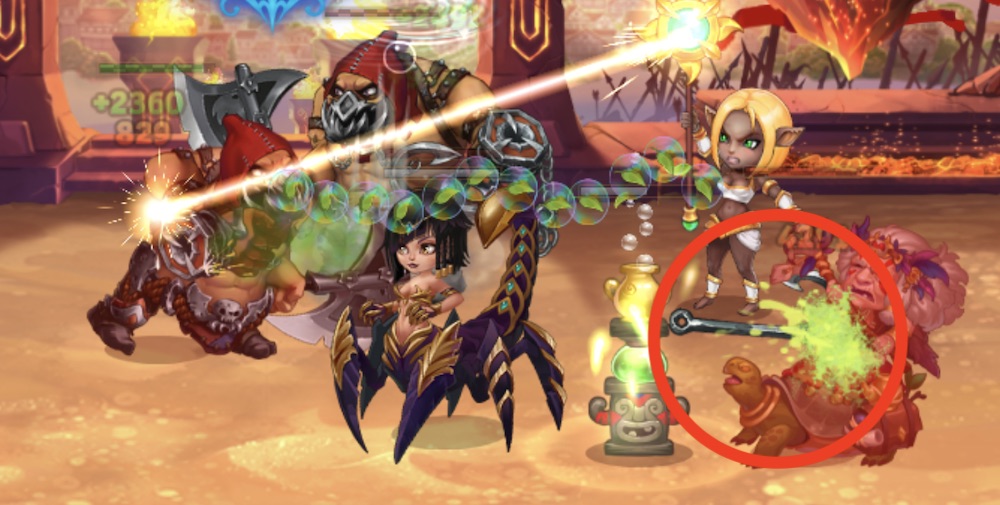 With this skill, Cleaver basically draws the furthest enemy to him.
In this game, the rearguards are Healers or Support heroes who aren’t tough. If you pull them to the front with this skill, you can easily take them down.

The allies who work best with this skill are strong DPS heroes who attack in front of the enemy with a basic attack and their skills…like K’arkh, Jhu, Ishmael, Qing Mao, Celeste, etc. Conversely, this skill does not work best with heroes who deal with AoE(Area of Effect) damage …like Keira, Twins, Orion, etc. This skill is what makes the combo with Cleaver and Peppy so popular.
If you’re playing the Facebook version, you might want to combine it with Albus. (Oliver is the most common pet of the tank though) A stupid skill that just adds Strength to Stats. This skill adds only 36000 Health and 920 Physical Attack at maximum (90 skill levels).
Cleaver can raise Strength to a maximum of 13862, so this skill only gives you a 6.6% increase.

Cleaver is not a DPS, so the skills he deals damage to are not that important. Stats like Armor and Health are more important than skill levels.
Of course, if you have enough gold, max out all skill levels! 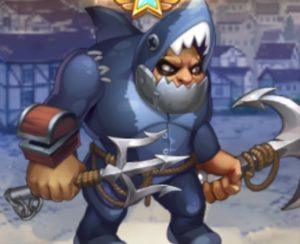 He has four skins: Default, Champion, Barbarian, and Masquerade.

The shark costume(Masquerade Skin) has the highest priority. He’s a tank, so armor is the most important stats for him. If you’re not sure whether to buy a Barbarian or a Masquerade, definitely go with Masquerade skin.

Then max out the Default skin before you buy a Barbarian Skin.
If you maxed out your Barbarian Skin, you would need 55,410 Skin stones, which would increase his Health by 106,645. The efficiency of your investment in this case is 1.924 Health per Skin Stone.

If you simply wanted to increase your health, Barbarian is more efficient, but since Strength is Cleaver’s Main Stat, it has a different effect. It changes the odds of enemies dodging and taking Critical Hit damage from them.
So it is recommended to maximize your Default Skin before purchasing Barbarian.

About Champion sikin…to begin with, a tank is not required to have much Physical attack stats. So even if you get a champion skin, don’t grow it until you’ve maxed out your other skins.

Cleaver’s Glyphs top priority is Armor then Magic Defense.
Physical Attack basically doesn’t need to be raised fast. If you have Runes to raise Cleaver’s Physical attack, spend them on Attacks/Penetrations of DPS.

2nd >= 1st >= 3rd
Basically, focus on the 2nd. If a tank goes down, the front line collapses, and the DPS goes down as well.
The next one is the 1st. Tanks are attacked more often by enemies, and it is more likely to gain Energy, so the 1st skill is activated more often than other heroes.
3rd is not cost-effective, so if you have Runes to spend on 3rd, spend them on DPS heroes instead.

Unlike the tricky-moving tanks like Luther and Rufus, Cleaver is a classic tank, who performs the task of “absorbing damage“. So, basically, Cleaver can fit on any team.

In this game, teams are basically decided based on who is/are DPS.
However, if you are going to build a team on the basis of Cleaver, it’s best to combine him with a DPS who attacks the front line with strong single hit. The 1st skill of Cleaver draws the farthest enemy, who is generally healer, to the front. So it’s good to combine him with someone who deals strong single hit damage to the opponents in the front like Jhu, K’arkh, Celeste.
AoE DPSs like Orion, Keira, Twins are not the best partner of Cleaver.

How to Get Cleaver 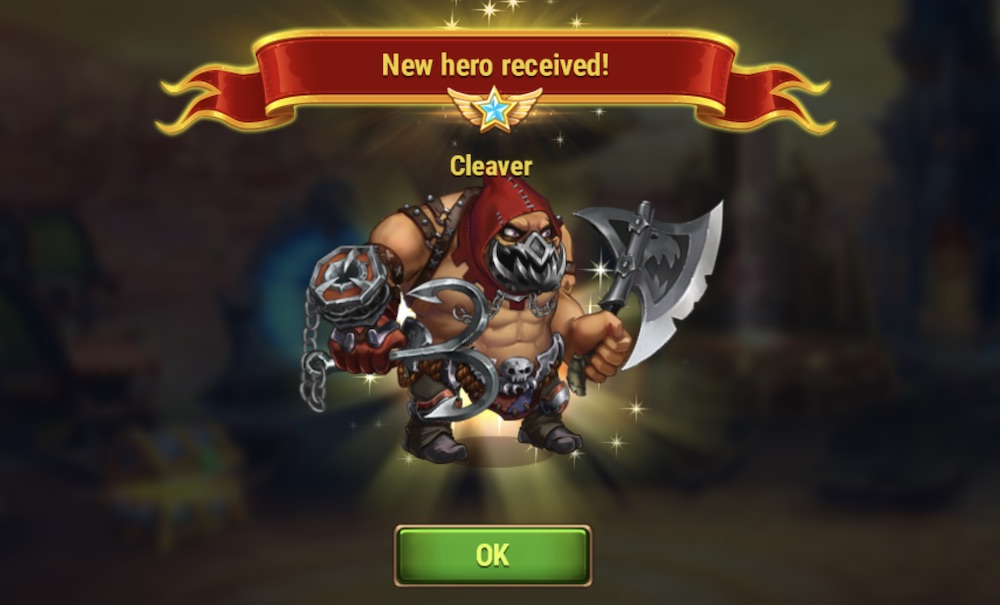 So basically, try to get him from Heroic Chest.

How many Heroic Chests do I need to open to get him?

The official says the chances of winning is 0.01%.
However, the official also stated that the more chests you open, the more likely you are to win a Cleaver. (How much it rises with each opening is undisclosed. Some people have argued that every time you pull a Heroic Chest, your drop rate increases by 0.01%)


my experience
In my experience, I drew x10 chests 40-50 times so  400-500 chests were needed to get him for me.
My guildmates are mostly Whale(big spender), so we all have Cleaver. From what I’ve heard from them, there are roughly open 40-50 of x10 Heroic Chests to get Cleaver like me.
But I think you can get him from free chests. I’ve played for a year and have drawn another two from the free chests!

Can I get Cleaver with the free Heroic Chest?

Yes, you can!
You’re perhaps thinking like “I don’t spend gems to Heroic Chest, so I can’t win the Prize from free chests”. But in fact, it is possible to win Cleaver by a free chest that you can open once a day for free.

As proof, here’s a screenshot of what happened when I actually won it. (Once you draw Cleaver, the Grand Prize becomes 50k soul coins) If you’re just starting out in the game, You may be thinking like “This isn’t Cleaver!”. I know how you feel, but this is actually Cleaver.
These are the coins for the Soul Shop, which will be unlocked after you make any of the heroes to Absolute star(6 stars). At this time, I already own a Cleaver and this is the second time I’ve won. Therefore, the Grand Prize is a Soul Coin.
There is no meaning to get a second Cleaver or Cleaver’s soul stones because the first Cleaver is guaranteed to be an absolute star at the moment you get it.
For this reason, 50,000 Soul Coins are prizes for the second and subsequent wins instead of Cleaver.

By the way, I won this by the free Heroic Chest about 4 months after I started playing the game. (I think it’s about the 120 times or something)
And I drew my third Cleaver in my 10 months.

So, even if you’re F2P(free to play player), you can still get Cleaver. However, if you’re a F2P player, I’d recommend using Astaroth rather than waiting for Cleaver as your main tank. He’s very useful, even though you get him for free in the early game. (In fact, my main tank is an Astaroth, not a Cleaver.)
Aurora also became so strong on Facebook/web version. So you don’t need to stick to drawing Cleaver at all.