Aurora became an OP tank in the Web/Facebook version after adding the pet (Cain) and gaining energy by dodging (changed in the May 20 patch).

The mobile version is not as OP, but she is still a powerful tank. This article will be based on the Web/Facebook version.

Why is Aurora so strong?

What makes Aurora so strong is that it is a fast looping skill activation due to the following repetition.

STEP.1
Aurora dodges
STEP.2
She gains energy for the damage she was supposed to take
STEP. 2.5
She gains energy from Cain's Patron bonus
STEP.3
Aurora activates the 1st skill
STEP.4
Artifact #1 buff is applied to Aurora and all the ally
STEP.5
Dodging chance is increased, and allies also start to dodge
STEP.6
Aurora dodges and activates the 1st skill(loop)

By repeating these steps, Aurora will be able to activate her 1st skill in quick succession. If both Aurora and Cain are maxed out, Aurora will activate her skill about once every 2 seconds or more (that’s not a metaphor)

To see for yourself, take a look at the video below to see how Aurora performs.

You can see that 6 of the Artifact #1 buffs are activated at the same time in the battle above.  In some cases, you will have seven buffs at the same time (like every 1.3 seconds). In a situation like that, it will be very difficult for the enemy to hit your team with physical attacks.

By the way, Aurora’s continuous dodging is most frequent about 30 seconds after the start of the battle. The more attacks your opponent has, the more energy Aurora will get, so in the middle to late stages of the battle, when the number of enemies decreases, the number of skill activations will decrease.

Aurora is a late bloomer

The negative feature of Aurora is that she is kind of a “late boomer.” You won’t be able to feel Aurora’s strength until you’ve raised Aurora quite well and raised her pet Cain too. Aurora’s strength can be felt after you have increased her Dodge, Magic Attack, and Magic Penetration. Also, you need to make Cain at least purple that gives Aurora an extra Dodge bonus. (If you want to feel like, “oh my Aurora is so OP!” you should have at least five stars, V+2 Cain)

She is a useless tank in the early to the mid-game anyway. Compared to Cleaver, who is a hard tank with 6-stars power by default, or Astaroth, who starts to show his prowess after purple, it is almost certain that she cannot be useful in the early to mid-game.

If you’re new to the game, you’ll have to try not to break your heart. Because of its relative weakness compared to other tanks, you’ll need to invest a lot of money to make Aurora work in the early to mid-game.

Anyway, if you don’t get a purple cane, you’re out of business, so hang in there until that point.

Of course, even if you’re a F2P player, you can still make her maxed out  OP tank. But be patient. It takes a lot of time.  (In this game, paying means basically “buying time by money,” so it’s possible to get her to maxed out even if you don’t pay.

Other status tables are also attached, so please check this for more information. (click to enlarge) 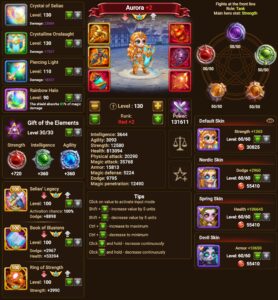 A light flash strikes at the center of the enemy team and deals damage to all enemies around the point of impact.
Maximum: 23,084 (50% of Magic Attack + Skill Level * 40)

This is Aurora’s most important skill. It creates rainbow-colored area damage in the center of the enemy.

You may be thinking, “This skill does just little damage, so this skill is not useful.” However, if you add purple Cain as a Patronage pet, this skill will be activated many times, so the total damage will be quite huge.

This is a very simple but useful skill.
The stun duration isn’t specified in the skill description, but it’s probably 3 seconds.

This is a simple and low-powered skill. In most cases, this skill does not affect the outcome of the game.

This is a passive skill that greatly reduces magical attacks from the enemy. This is why Aurora is known as the counter to magic teams.

The white bar under Aurora’s remaining Health is used for this skill.
Other heroes’ white bars (such as the Shield skill) have a gauge that decreases and disappears when it runs out, but Aurora’s shield gauge increases with magic damage.

By the way, this skill does not “always” reduce magic damage by XX%. When a shield explodes, i.e., “damage > shield capacity,” the damage that the shield cannot prevent will be taken as usual.

*The Devs only publish the damage reduction percentage. So we have no formula for calculating the shield’s damage capacity and the amount of damage it deals.

How to train Aurora

Tanks are supposed to have their Armor up first and foremost in the game, but this is not the case with Aurora. The reason is that even if you max out Aurora’s Armor, her armor cap is still too low.

Most other tanks, when maxed out, have a situation like

But Aurora’s Armor only goes up to 15,813 when maxed out, so it becomes like

which means she can’t reduce the damage of DPS.

If you don’t understand the relationship between Armor and Damage Reduction, check out the following article.

As for skins, Nordic Skin should be the first priority to increase Dodge status. Because as I mentioned above, Aurora should avoid getting damaged by Dodging.

As for the second skin, you can choose Default or Devil skin, depending on your situation. Generally speaking, I would choose the Default skin as the second skin to increase Strength, Health, and Physical Attack. But if you feel that your opponent’s non-physical DPS attacks are doing too much damage to Aurora, you may want to prioritize Devil skin.

Start working on Spring skin after you have maxed out Default skin that also increases Health.

Like skins, Glyphs should be raised with priority on Dodge.

For all other Glyphs, you can change the priority order of your Glyphs depending on the situation. (Except for Dodge, the order in which you raise them faster won’t make a huge difference.)

Also, if you feel that your Aurora is dying too quickly, you should raise your Strength and Health.

Glyphs are less difficult to get maxed out than skins or artifacts, so raise them flexibly. (If you’re not in an active guild, though, you’ll have to be more careful because Runes are hard to get)

When it comes to Artifacts, raise #1 first. The synergy of the #1 artifact with Aurora and Purple Cain is incredible.

#2 is also important, though slightly lower in priority than #1.

Of course, #3 should also be raised eventually, but its priority is lower. This is because raising #3 does not raise any of Aurora’s key stats: Dodge, Magic Penetration, or Magic Attack. If you’re going to make Aurora’s #3 absolute, you better spend your resources on other heroes like DPS first. If Aurora is more likely to get knocked down fast in a fight, then you should raise Aurora’s #3.

Aurora is a great tank for any team.

She doesn’t have any tricky skills like changing the enemy’s position, and her artifact #1 is Dodge, not Penetration or Phy/Magic Attack, so there’s no combo to call it. Every team will fit her.

Basically, Aurora is an effective hero against most heroes.

For a physics team, a maxed-out Aurora is a nightmare to fight.

Aurora on the defense in guild wars is particularly annoying for Physical teams. If fighting in the arena where you can start over, that’s okay, but in a guild war, the basic rule is “don’t fail.” So, if you only have a Physical Team, you should avoid the Aurora, a gambling game.

In case the difference in power is so big that ” your hero’s main stats > > enemy Aurora’s Dodge,” Aurora can’t dodge it, and you can push it.

If your opponent has a very strong Aurora, it is better to use a pure damage team such as Lian or Maya, or a magic team to push them. The nightmarish collaboration of Aurora and Isaac should be overcome with pure damage. If the opponent does not have Sebastian, Aurora can be countered by Satori.

His 4th skill is “Whenever an opponent gains Bonus Energy, attach 9 Fox Fire Marks to that opponent”, so every time Aurora + Cain dodge, this skill will be triggered. 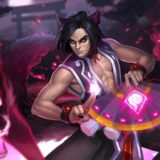 Event: Time of the Fearless