Keira is a physical DPS whose basic attack becomes an all-out attack if you grow her up to blue.

She’s the DPS at the core of a combo called the “Blender”. There was a time when the trend was to team her up with Sebastian, Jet, or Nebula and attack hard and quickly with a high-powered multi-target attack.

However, nowadays, the number of people who use that combo seems to be decreasing, probably because it can be quickly countered by heroes such as Aurora with Cain, Corvus, Yasmin, etc., which heroes everyone uses rather often. 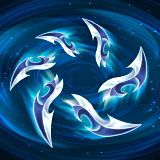 Keira launches a whirlwind of blades. The blades reach the furthest enemy and then return, dealing damage to enemies as they fly and silencing them for 4 seconds on their way back.

Damages are powerful, but sometimes 4-second silence effect is surprisingly annoying than damages for opponents. And since Keira is good at fast attacks, there are quite a few cases where 4 seconds of silence become fatal for an opponents. 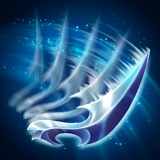 When you level up this skill, her attack speed can go up to three times faster, which is pretty fast. This means that she will do 15 seconds of action in 5 seconds(1/8 of 2 minutes battle).

In the default skin, you will wear a blue aura while activating this skill. In this video, she attacks four times during the five seconds. Passive skill. Keira’s basic attack can ricochet between enemies. The ricocheting blade deals 25 (25)% of basic attack damage on each hit.

From blue color forward, when this skill is unlocked, Keira will be a multi-target (AoE) DPS.

This skill deals 25% of physical damage to the second hero and behind. In addition, if she turns purple, she may deal additional PURE damage with her #4 skill. 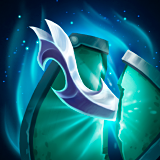 In the video, you can see the pure damage of this skill on the three heroes behind her whose Armor is lower than Keira’s Armor Penetration.

Honestly, it’s hard to decide which skills to prioritize; all of Keira’s skills are important. Try to make #1 and #3 at least higher than the level of the opponent’s hero.

However, while the success rate of the #1 skill’s silence depends on the skill level, the #4 skill can do extra damage itself even at level 1. So I think it’s better to prioritize #1 over #4.

Because of skill #4, Winter Skin is the highest priority for Keira.

Winter skins are only available at the New Year’s event. The lack of Winter Skin is fatal to Keira, so if you don’t have her Winter Skin and are reading this article from February to Autumn, maybe you should consider switching your DPS to a different hero.

Armor Penetration is the highest priority. You may think that Physical Attack is next, but Keira is a very fragile hero, both in terms of status and position, so increase her durability with Armor and Health.

If you want to build a critical team and make a fast attack line, you can give priority to  Physical Attack than Armor.

If her Armor Penetration has been fully developed with others like skins and equipment, let’s give priority to Artifact #1.