In this article, I will explain how damage is calculated in Hero Wars.

For the sake of clarity, I’ll use the following notation for this article.

The idea of damage calculation is the same for physical and magical attacks.So, I”ll make the notation consistent with Offensive Power, Defensive Power and PEN.

The relationships are as follows

I’ve created a calculator that you can use to input amount of Offensive Power, Defensive Power, and PEN to calculate actual damage. I think the formula will be easier to understand if you input your own hero’s stats into this calculator and test actual damages in Guild Battles(on fb/web) or Trainings(on mobile). 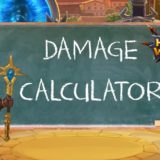 Damage calculations are not calculated by subtraction

*To make it easier to understand, I will start the explanation without the PEN

The damage calculation in Hero Wars is not simple.
Maybe you are thinking of it as simple as the below, but the actual method of calculating damage is quite different.

Defensive power does not reduce your opponent’s offensive power by subtracting it, but rather reduces damage by a percentage based on your Defensive power
The actual damage calculation formula is as follows

Maybe you’re thinking “You’re a liar! My heroes have over 3,000 Armor/Magic Defense, but they are taking a lot of damage!”
That’ s because of the Penetration (PEN). The Attackers’ PEN will reduce the Defender’s Defensive Power.
Let’s modify the previous formula to include the existence of a PEN.

For example, if a Defender has 3000 Armor

and The Attacker has 300 Armor PEN

So in game battle, damage will be calculated like this

Now, as a case study, let’s assume that the Attacker has 20,000 Offensive power(Physical/Magic Attack) and 5,000 PEN(Armor/Magic Penetration), and look at the following table

Now you understand how important it is to raise your DPS’s Penetration.Conversely, when your hero’s Defensive Power are subtracts by your opponent’s PEN, if they have even 3,000 Defensive Power left, the damage your heroes taken is reduced by 50%.

Examples of actual damage in battle

I know it’s hard to get an idea of what’s going on if I just list the numbers, so let’s take a look at an example from an actual battle.
I’ve set K’arkh to Attacker, so let’s check it out.

※I tested with the fb/web version at max status. Note that the maximum status is different on the mobile but damage calculation formula is the same.

K’arkh
SKILLS: Karkh’s third skill is a passive skill that deals massive damage (100% of Physical attack in stats) to enemies thrown in the air during battle, plus double damage if the opponent’s level is below the skill level.
The first skill throws the enemy into the air.

Aurora only has 15,813 armor even with her status max status, so subtracting K’arkh’s PEN(34,600) is a negative.
Defensive power cannot be negative, so it is calculated as 0.

Let’s look at the normal attack. The damage reduction by Armor is 0%, so K’arkh’s Physical Attack 67,020 becomes damage.

The damage reduction rate is 0%, so this damage will go directly to Aurora. How far should Armor and Magic Defense be boosted?

Now you understand the relationship between Offensive Power (Physical/Magic Attack), Defensive Power (Armor/Magic Defense), and PEN (Armor/Magic Penetration), but how much should you boost your Defensive Power to?
As for this matter, it’s all dependent on your server’s competitors, so it’s hard to say “just get it up to this number”.
Personally, for beginners, I think it’s a good idea to make it at least 3,000 or so and then boost it depending on strength of other player’s DPS on your server.
If you feel that the enemy’s attack is too powerful, you should grow your Offensive Power, and conversely, if your attack doesn’t deal good damage to the enemy, you should boost your hero’s PEN. 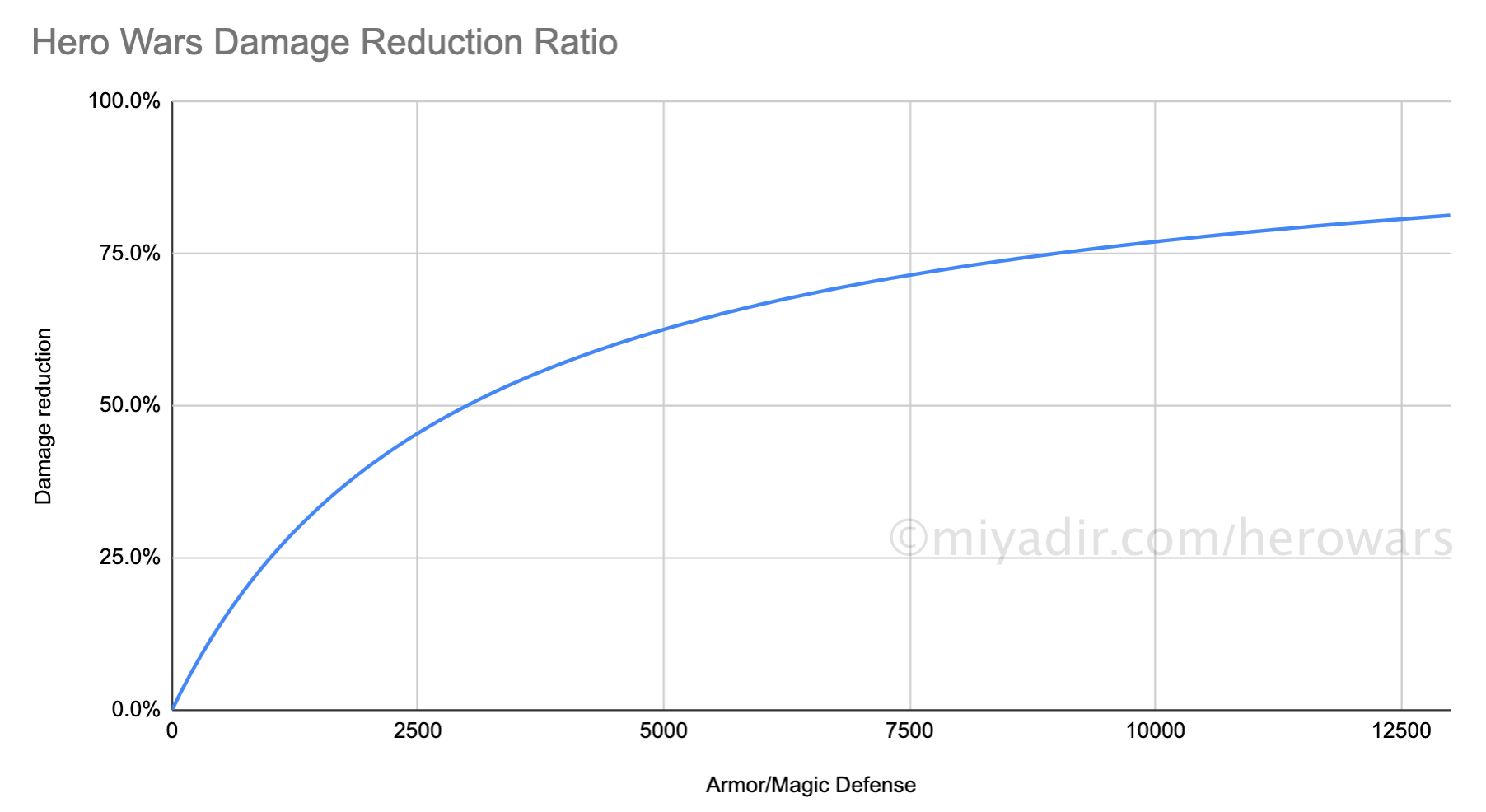 The investment efficiency for every 100 Defensive Power, in percent, is as follows (Click to enlarge)

Take a look at those graphs.
Once your Defensive power exceeds 2500, the damage reduction increase per 100 defensive power drops to less than 1%.

For specific investment efficiency numbers, please refer to this article.

Perhaps you’re thinking, “What do I do in case opponent’s Artifact#1 is a PEN! If your opponent’s Artifact#1 is Maximum and has PEN+32,040, there’s nothing you can do to deal with it by raising the stats.
Almost all of your heroes will exceed their max defensive stats, so you can’t deal with it by raising their stats. With the exception of a some of tanks, it exceeds the max stats of almost every hero’s Armor/Magic Defense, so raising a hero’s stats won’t deal with it.
If you want to handle your opponent’s maxed out Artifact #1 that boost PEN, you’ll have to team up with a Heroes who have Defensive power on Artifacts#1 instead of increasing each hero’s Defensive status.
In the case of handling enemy’s Armor Pen, you have to take on Tanks or someone like Helios who have Armor on Artifacts#1. In the case of handling enemy’s Magic Pen, it’s Maya, Peppy, Cornelius etc who have Magic Defense on Artifacts#1.

In addition to Physical damage (orange) and Magic damage (purple), Hero Wars also has a silver damage called “pure damage”. Pure damage ignores the Defensive Power(Armor / Magic Defense).
Note that regardless of your Defensive Power value, you will take full damage. Pure damage is completely skill-dependent. The damage taken will be the same value as the amount on the skill screen.

Pure damage is indicated by a green color on the skill screen.
Both Pure Damage and Heal are shown in green on skill screen, so beginners should take care not to confuse them.

This is pure damage skill.

This is heal skill.

The green color in battle is “Heal” not “Pure Damage”, so don’t get confused. Lastly, I’ll give you some examples to help you understand from specific numbers.